This guest needs almost no introduction. Without him and Dave Winer, the podcasting space as we know it would not exist. An idea turned into a vision that led to an action that has changed the way millions of people consume media today.

This is Adam’s story, as no one else can tell it. He is co-host of the Best Podcast in the Universe, No Agenda, and co-founder of the new startup, Small Batch Audio, with an upcoming Kickstarter that I am hopeful the podcasting community will get behind.

As a heads up – there will be some terms used on in the show today that may seem out of context or confusing if you’ve never listened to No Agenda. Enjoy the podcast!

Show Links:
Curry.com
No Agenda – The Best Podcast in the Universe
SmallBatch Audio

Dawn and Drew of the Dawn and Drew Show, are two of the nicest, most entertaining, and engaging podcasters you will ever meet. The no hold barred show has entertained their loyal audience since 2004. Making them the very first podcasting couple that shared everything. In this interview you are going to fall in love with them.

This has to be one my most favorite interviews I have done in the past 12 years. You will listen twice I promise you. 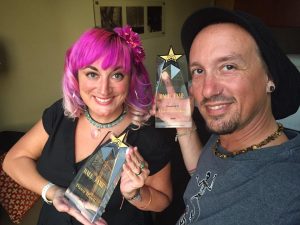 Dave Slusher is a software developer, science fiction fan and pioneering podcaster. He began his podcast the Evil Genius Chronicles in August 2004 which still continues to this day. Before that he was the producer and host of a nationally syndicated public radio show Reality Break in the mid-1990s.

The show featured interviews with science fiction and fantasy authors, comic book creators and other notable figures from the worlds of genre fiction. Slusher was the co-founder of a technical and social media conference in Myrtle Beach SC called CREATE South. He has worked as a software developer for companies large and small, Fortune 20 firms and startups that are long defunct. He currently works for ServiceNow as a developer evangelist where he makes a living with much of the skill set he learned from the world of new media.

Gary Leland – Podcast Hall of Fame inductee was the founder of the Podcast Pickle website and played a instrumental role in the early days with the website, he has went on to be one of the founders of Podcast Movement and is known throughout the Softball world for his show Fast Pitch Softball. Gary shares his story on how he has tied his business to his podcast from the very beginning and gives a perspective from a successful business person on how podcasting has changed his business.

The Podcast Legends Podcast is talking to podcasters that launched or had podcast in the 2004-2006 range for this first phase of the project. If you have a podcaster in mind that I should interview. Drop an email to geeknews@gmail.com

In this edition of Podcast Legends we talk with Michael Butler the host of the Rock and Roll Geek Show. One of the original first 20 podcasters, who while promoting his band on his podcast, landed one of the coolest gigs at the former Podshow then Mevio.

Here his story and be sure to check out his weekly podcast.

Brain Ibbott host of Coverville started his podcast on Sept 18, 2004, and has produced 1138 episodes of his show. Over the years Brian has been instrumental in moving the space forward, and was the first to get licensing to play music covers in his show.

Brian has built a mini empire of shows that are in production today. Brian share’s his story of the genesis of Coverville.

Tim Bourquin and his brother Emile co-founded the Podcast and New Media Expo in Ontario California in the summer of 2005 setting the bar incredibly high for all future podcasting events.

In this interview we look at Tim and his brothers contribution to the podcasting space. We talk about the Podcast & New Media Expo, and the birth of an event where the podcasting community came together as a big family. For those that where not involved in the early days of podcasting this episode is going to set the tone for what I hope to accomplish with this show.

Tim is no longer active in the podcasting space beyond being a fan.. But you can check out his latest endeavors at AfterOffers.com.

Podcast Legends is a new podcast hosted by Todd Cochrane that talks to podcasters who have had and some still do have major influence over the podcast space.  It will take some time to just to talk to the podcasters that started the podcast evolution and my initial focus will be the 2004 to 2006 time period.

The goal is to get these luminaries stories whether they are still podcasting or not.. I want to hear the genesis of their podcast, what made them do a show, the challenges of the early years, where they are today, insider notes from the past, and where they think the space is going.

We have 100’s to interview, and already have a list of nearly 200 that have been suggested by podcasters. For now the site will focus on the early years and progress as we get as many as possible to tell their story.

My end goal is that by talking to wide diverse group of podcasters, that we will be able to capture the history of podcasting in a way that gives “everyone” a voice to provide input.

While I have not yet secured the PodFathers Adam Curry and Dave Winer, my goal is to have them both on the show in the near future.